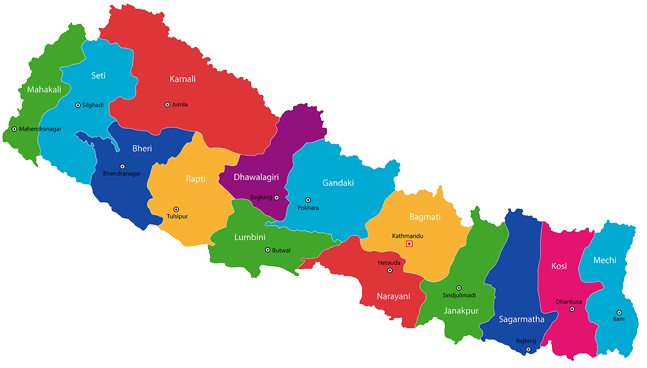 Nepal is a small country in South Asia Pacific region with an area of approximately 150,000 km square, situated between India and China. It has a population of around 30 million with growth of 1:35% per annum. The majority of population in Nepal is below the poverty line as declared by the Human Development Index. Geographically, Nepal is divided into 3 regions as Himalayan region, Mountain region and Terai (Plain) region. But administratively it is divided into 5 development regions with 14 zones and 77 districts. Lately, it has been divided into 7 Provinces, in line with the Federal Republcanism.
The political situation of Nepal is volatile and unstable. More than 80% of the country populations are considered to be Hindus, whereas the Christian population is only about 1.4% as per the census 2011. However, in reality Christian population is estimated to be above 3%.
Nepal was known as the only Hindu Kingdom in the world for many centuries until 2006 AD when People Movement was successful to overthrow the monarchy system and declare Nepal as a Federal Republic Democratic country. Along with this significant change, the new government also declared Nepal as a secular state. This declaration gave more freedom to preach the Gospel of Jesus Christ more openly without any legal restriction. In May 2015, Nepal promulgated its new Constitution which designated Nepal as a secular state. However, the definition of secular state says that people are free to practise 'sanatan dharma', which in effect means Hinduism!
Some portions of the Code that pertain to religious elements:
Criminal Code 2017
Section 9
Offence Regarding Religion
155. Religious or holy places
1. No one should damage, hate or insult or other related act on religious belief or holy places or pollute graveyards of any ethnic groups or community intentionally.
2. If found guilty; there will be punishment of three years of imprisonment and penalty of thirty thousand rupees.
3. If foreigners are found guilty; they will have to be deported within seven days after completing imprisonment mentioned in first clause.
156. Religious sentiments
1. No one should stab religious sentiments of any caste, community or ethnic groups by using texts, writing, verbal, symbols or any other means.
2. If found guilty; there will be punishment of three years of imprisonment and penalty of thirty thousand rupees.

157. Religious traditions
1.No one should create any kind of obstacles in religious tradition of other faith being practiced since ancient times.
2. If found guilty; there will be punishment of one year of imprisonment or penalty of ten thousand rupees or both.
158. Religious conversion
1. No one should involve or encourage in conversion of religion.
2.No one should convert a person from one religion to another religion or profess them own religion and belief with similar intention by using or not using any means of attraction and by disturbing religion or belief of any ethnic groups or community that being practiced since ancient times.
3. If found guilty; there will be punishment of five years of imprisonment and penalty of fifty thousand rupees.
4. If foreigners are found guilty; they will have to be deported within seven days after completing the imprisonment in third clause.
159. Statute of limitations
1. Filing of lawsuit is not valid after six months from the date of knowledge of offence committed for article. Such status of limitation will be three months from the day of offence committed for rest of the articles of this section.
Such provisions have already affected evangelism, teaching, training and other works, as many have been arrested and sued simply for the crime of evangelism.

One of the Ministries of Message of Hope is to broadcast Gospel through National media called Radio Nepal. This ministry has been effective to reach the unreached people with Gospel of Jesus Christ. Since 2006, this ministry has been running to share the Gospel through national media such as Radio Nepal in partnership with like-minded Christian individual friends and organizations and publishing Christian devotional booklet “The Word For Today” in Nepali language to help the growing numbers of Christians throughout the country including radio listeners with sound biblical teaching.

The Message of Hope was then registered as NGO with the government of Nepal in the name of MESSAGE OF HOPE, NEPAL (MOH). This is the first Christian media program that has been registered with the government. This registration allowed MOH Nepal to preach the Gospel of Jesus Christ using government and private Medias. Ever since then MOH has been broadcasting the Gospel message through Radio Nepal. It is encouraging to receive many letters from our listeners every month and to know that many of them are receiving Jesus Christ as their Lord and Savior. Now as the time and context has changed, as people these days use televisions for the means of their entertainment and information, and with the feedback from our listeners.

The vision of “Message of Hope Nepal” is to expand the kingdom of God through Mass-media.

The mission of “Message of Hope Nepal” is to reach the unreached people with the Gospel of Jesus Christ through various activities, using national and local Mass-medias.

⦁ To spread the Gospel of Jesus Christ through medias to the unreached people of Nepal and beyond
⦁ To help the listeners in their faith by providing relevant materials and help them motivate to live Godly life
⦁ To help the nation in bringing peace and reconciliation by means of Biblical message
⦁ To help the Nepali Churches for devotional life by providing relevant literature.
⦁ To bring awareness to the people of Nepal by lifting up the backward people and to run service oriented programs.